There are many reasons why people decide to use spray paint. Whether they are graffiti artists or need a quick fix for their car, there are plenty of reasons why someone might want to use it. But is spray paint bad for the environment?

There has been some speculation that it may be harmful because it contains toxic air pollutants and volatile organic compounds. This blog post will explore whether or not this is true!

Is spray paint bad for the environment?

Propellants are gases that rapidly expand when the valve is opened, forcing the paint out of the can.

Chlorofluorocarbon gases (CFCs), originally used as propellants, were phased out in 1978 after it was discovered that they damage the ozone layer.

Other gases such as butane and propane were substituted for CFCs. These hydrocarbon propellants were used extensively until the 1980s when it was recognized that they contributed to pollution.

Following that, laws were enacted limiting the quantity of lead that may be used in spray paint. To address these issues, a new class of propellants known as hydrofluorocarbons (HFCs) for aerosols was developed. Among them are 1,1-difluoroethane (Propellant 152A) and 1, 1, 1, 2-tetrafluoromethane (Propellant 134A).

Aerosol spray paint is solvent-based, and hence has health and environmental dangers and consequences. Additionally, empty aerosol paint cans with residual substances are often classified as “hazardous waste” due to their volatile contents, increasing the amount of hazardous garbage disposed of at your site.

Also read: Is spray paint bad for us?

Regrettably, the only way to remove the substance that makes aerosol cans harmful is to puncture them and release the residual pressure they hold. This violates the safety measures on the majority of cans and contributes to air pollution.

Do not puncture aerosol containers unless you have a puncturing instrument and staff certified to use it.

It is important to responsibly dispose of any leftover paints and not release the fumes into the air as they can cause health issues for those around you, especially individuals who suffer from asthma or similar respiratory conditions.

The chemicals used in most spray paints today may pose a threat if released directly into the air, so take care when disposing of them.

So is spray paint bad for the environment? In short, yes – it can be harmful to both the environment and your health. Thankfully, there are ways to lessen the impact, like using less toxic paints or properly disposing of aerosol cans.

How does spray paint affect the environment?

Spray paints emit VOCs that are harmful to the environment. The main effects of these emissions include damage to plants and wildlife, as well as increased rates of skin cancer and respiratory problems in humans. VOCs are also a major contributor to ozone depletion and global warming.

Spray paints that contain chlorofluorocarbon gases (CFCs) also contribute to the depletion of the ozone layer. The ozone layer is an important part of the Earth’s atmosphere. It blocks out harmful UV rays, which can cause skin cancer and eye damage in humans.

VOCs are more readily released into the air when aerosol cans are used. This is due to the combination of VOCs and nitrogen oxides, resulting in environmental pollution. The ground-level ozone that results from this reaction is harmful to both humans and the environment.

This is due to their ability to simultaneously react with solar UV radiation and increase the formation of ground-level ozone. This indicates that the ozone layer is greater than anticipated on sunny days.

When evaluating aerosol spray’s environmental impact, keep in mind that the canister may also contribute to air pollution and smog generation. A standard aerosol canister contains VOCs, which enhance smog in the air and thus decrease visibility.

As a result, regions that suffer from too much smog develop a regional smog phenomenon. This is one of the negative aerosol spray environmental effects since it gets worse during stagnant weather.

It can cause significant environmental problems, including floods, droughts, and damage to coastal regions. Spray paints that contain HFCs are contributing to this environmental issue.

According to a report, since 1880, the temperature of Earth has risen by 0.14 degrees Fahrenheit (0.08 degrees Celsius) each decade, The rate of warming during the previous four decades has been almost twice as much: 0.32° F (0.18° C) per decade since 1887. This is due to the greenhouse effect, which is caused by certain gases that trap heat in the Earth’s atmosphere.

The poor disposal of aerosol canisters:

Many people do not dispose of aerosol canisters properly. This can cause environmental problems, as the cans often end up in landfills or waterways. This is why it is important to recycle aerosol canisters.

Spray paint can have a major negative impact on the environment. It is important to be aware of the effects of spray paint when making decisions about what products to use.

How to reduce the environmental impact of spray paints

When possible, use less paint to reduce the amount of material waste. This will help to reduce the environmental impact of spray paints.

The use of a spray pack also eliminates the need for an aerosol canister, which often contains harmful chemicals.

When you are finished using a can of spray paint, be sure to properly dispose of it. This means recycling the canister or taking it to a waste facility that recycles aerosol canisters.

Using VOC-free spray paints can reduce the amount of air pollution. These types of spray paints do not release harmful organic compounds into the air.

One way to reduce VOCs in spray paint is by using water-based acrylic paints. Water-based paints are environmentally safe, especially when compared to solvent- or oil-based paint.

Spray paints that contain high levels of carbon black can increase radiation levels. It is important to avoid these types of spray paints, especially if you are going to be using them indoors.

You can check the level of carbon black in a can of spray paint by looking at the Material Safety Data Sheet (MSDS).

Using products that do not contain carbon black particles can help to reduce the environmental impact of spray paints.

Spray paints have a major negative impact on the environment. It is important to be aware of the effects of spray paint when making decisions about what products to use.

Does spray paint pollute the air?

Yes, aerosol sprays release harmful chemicals into the air. These chemicals can cause health problems and contribute to air pollution.

No, spray paint does not contain mercury.

Is it better to use water-based acrylic paint instead of oil-based?

What is the best way to dispose of an aerosol can?

Recycle the canister or take it to a waste facility that recycles aerosol canisters. This will help to reduce the environmental impact of spray paints.

Do Aerosols cool the planet?

No, aerosols do not cool the planet. In fact, they can have the opposite effect and contribute to global warming.

Is oil-based paint bad for the environment?

Yes, oil-based paints are bad for the environment because they release harmful chemicals into the air. They can also contaminate water supplies.

Can you put aerosol cans in recycling?

Yes, you can recycle aerosol cans. However, it is important to check with your local recycling center to see if they accept aerosol canisters. 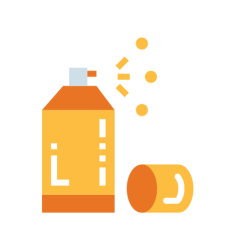 Hi, while painting our various DIY projects, we have spent many years researching the best spray paints. We realized that many people are searching for the same thing on different sites. We, therefore, have created this standard blog to provide effective solutions for the best spray paint.

Bestspraypaint.com is a participant in the Amazon Services LLC Associates Program, an affiliate advertising program designed to provide a means for sites to earn advertising fees by advertising and linking to Amazon.com.

I may earn a small commission for my endorsement, recommendation, testimonial, and/or link to any products or services from this website.